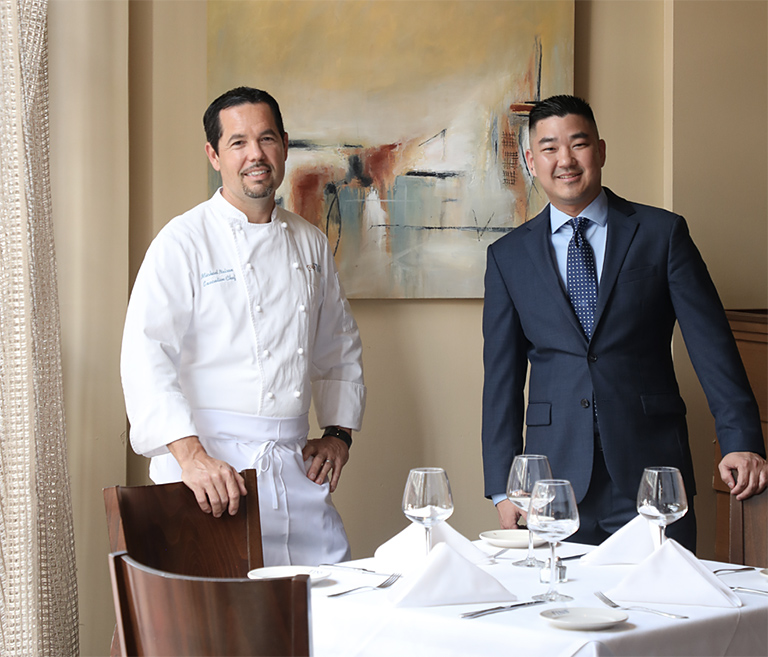 Chef Michael Nelson arrived in New Orleans in July 2005, bringing with him experience from the Culinary Institute of America in Napa Valley, and restaurants in Chicago and Seattle. He quickly rose through the ranks at GW Fins, first being named Chef de Cuisine in 2007, and then in 2015, he was named Executive Chef of GW Fins. Chef Nelson was recognized by New Orleans City Business’ Culinary Connoisseurs as being one of the top 50 professionals in New Orleans Dining Industry and was named a “Chopped Champion” on Food Network’s popular cooking competition.

For almost a decade, Chef Michael has made it his mission to increase the sustainability of seafood through better utilization of the entire fish. Chef Michael has created innovative butchering techniques to increase the yields of the fish GW Fins serves. He coined the term “Ocean Conservancy Cuts” on the menu to denote these remarkably delicious dishes (most notably our Fin Wings) that utilize parts of the fish “beyond the fillet.” Since embarking on this pioneering approach to advocating seafood sustainability, Chef Michael has become a culinary leader in this field locally, regionally, and nationally, being asked by chefs, fish houses, trade shows, as well as the James Beard Foundation to share his techniques.

Most recently, his innovations in seafood have led him to focus on dry aging fish. Chef Michael uses TenderChef dry-aging cabinets which are designed to control temperature and humidity to mature his fish to create exciting new specialty cuts. The results have been extraordinary–by allowing the fish to lose excess moisture and increasing the density, dry-aging creates a new depth of flavor, and the meat becomes more tender. For generations, Japanese sushi chefs have known the benefits of aging to release the best potential flavor possible. Guests of GW Fins flock to the restaurant to try these one-of-a-kind cuts of fish.

As General Manager, Kyo Juttner plays one of the most integral roles at GW Fins. The primary liaison between the servers and the kitchen staff, his adroit communication skills are utilized every day.

Spearheading the leadership of GW Fins’ Service Management Team for the past decade, Kyo is known for his calm and assured demeanor and passion for creating Raving Fans from every guest and employee who enters the doors of the restaurant.

From the time Kyo was a teenager he was an avid culinary enthusiast and took over the cooking responsibilities at home, crafting delicious meals for him and his family.

He began his restaurant career working at Brennan’s, after impressing the General Manager with his willingness to learn every aspect of the restaurant industry. He then moved along with that General Manager to several of New Orleans’ most acclaimed restaurants, including Restaurant August, where he was promoted to Restaurant Manager.

Kyo began his tenure at GW Fins in 2010 as a manager, where his commitment to providing the ultimate experience for our guests was clearly evident. He quickly moved through the ranks first as Assistant GM and was made Restaurant General Manager in 2012.

“I truly enjoy being able to develop my team of great managers, servers, server assistants, runners, bartenders, host and hostesses. It’s exciting to be able to come together every night to create a memorable dining experience for all of our guests,” he reflects. “ I also love that every day is a completely different experience – different guests, different challenges, different opportunities to create Raving Fans .. it definitely keeps me on top of my game,” Kyo concludes.

When not working at GW Fins, Kyo dovetails his passion for seafood into spending hours on the water fishing, cooking and enjoying dining at the many wonderful restaurants that New Orleans has to offer.